RSL disgraced at home in the US Open Cup 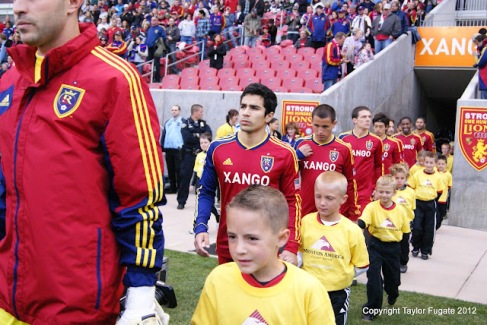 That was absolutely unacceptable.  A team of Real Salt Lake’s caliber should be able to take down a lower division team.  But any team can win on any day.  Minnesota came out to play and Salt Lake came out and played one of the poorest matches in the team’s history.  You think I’m exaggerating?  I was there.  I’ve never seen so many opportunities shanked away, I’ve never seen that many awful passes and bad touches and selfish play in an RSL game.

Sure, you can say it was our reserves.  It was.  But didn’t our reserve team dismantle a New England first team on the road last year 2-0?  This all goes back to saying one of Real Salt Lake’s mottoes, “Fortune favors the bold.”  Real didn’t play to their own philosophy, they weren’t very bold in anything they did.  Instead of linking up and moving forward as a team when things got tough, players started trying to beat as many opponents as they could on one dribble and eventually lose the ball.

There really wasn’t a bright spot on our team.  Olave had an especially rough game.  He had several clear-cut headers that would’ve easily been nodded in on another day ricochet of his head and out of bounds.  His terrible touch on a pass back to him led to the goal that sealed the game for the Minnesota Stars.

There’s really not much to say about this game.  I know that’s not how my claret and cobalt play.  It looks now as if that game was a hiccup stuck in the middle of an incredibly strong season.  I have no right to complain.  My team’s first in MLS!  Also, half the other MLS teams lost their US Open Cup games too!  As long as this doesn’t lead to more ugly showings in the future, Real should be just fine.

The match was a match meant to be forgotten in Salt Lake and always remembered in Minnesota.