RSL has a problem with Avila 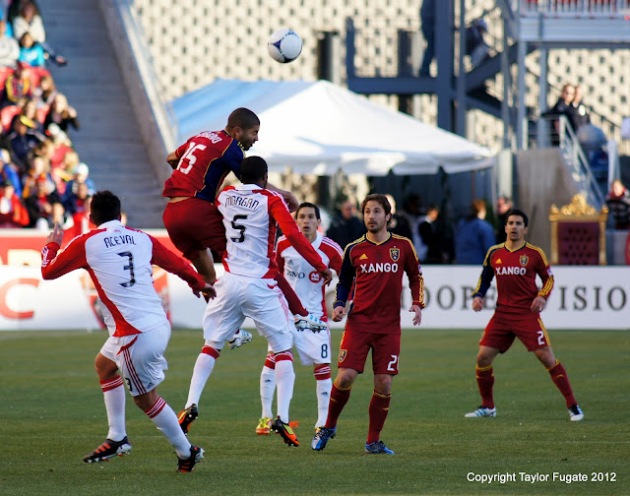 Eric Avila.  His name has a sour taste to it for any Real Salt Lake fan.  But what is it about him?  He hasn’t been a league powerhouse.  In fact, he hasn’t even started for teams he’s played for much at all.

Don’t get me wrong, he’s a fantastic player, in fact, I believe he should be a starter on Toronto.  But why has he been able to wreck havoc against Real?  Why hasn’t he found the same success against other clubs across the league?

I honestly think it comes down to his confidence against one of the strongest teams in MLS, Real Salt Lake.  It started two years ago in the first leg of the first round of the playoffs down in Frisco, Texas where Real was taking on FC Dallas.  It was tied and RSL were about to walk away with a good result on the road in Texas where they had never gotten any kind of positive result in their history.  Then everything was flushed away.  A late sub that nobody knew much about came on.  His name was Eric Avila.  In the dying moments of the game, Eric received a pass on his side of the field about midway between the penalty area and the half line.  He took a look up and drove a blistering shot into the far side netting of Rimando’s net.  That goal ultimately killed RSL’s playoff run that year after they returned to Rio Tinto where they could only pull off a draw.  They lost the series 3-2 on aggregate.

That’s the strike that all the Real fans remember Avila for.  But he’s stepped into a new role since then.  He’s gotten faster, and much more technically skilled since then.  I see him being one of RSL fans’ greatest enemies someday.  (That is if we don’t get him somehow. I’d love to see him in claret and cobalt!)  If he stays with other clubs I could see him becoming comparable to Conor Casey and Real’s fans’ hate for him.

So the bigger question at the moment.  What did he do to rip through our centerbacks Saturday

Here’s what I saw:

First of all, he’s got speed, serious speed.  That seems to be something that Real defenders struggle with.  Olave can catch up to anyone.  Without being physical enough to give a forward an opportunity to dive?  That’s another question.  But caught off guard like on Saturday, Avila can burn through the RSL defense.

It’s not just his pace, but his ability to use his creative footwork without slowing down much at all.  Watch his goal.  He receives the ball and cuts Olave to bits with a movement of the shoulders and a hard cut.  After that he only has to slot the ball past a rushing Nick Rimando.

I think one thing that separates him from other attackers is that instead of trying to make runs in between the outside backs and the centerbacks, he positions himself in the center of the field at makes his run right between Schuler and Olave.  In the play that he scored on he had just enough space to reach a sort of no-man’s-land between the two centerbacks.  There wasn’t much communication between Schuler and Olave, so when Olave over committed, Schuler wasn’t able to back him up.  He also knows that he can lose centerbacks by dropping back when the box is full.  Midfielders’ first reaction isn’t to mark him because they’re trying to track back to defend the guys they’ve been up against all game.  In the end he’s sometimes left alone, like on the play that he struck the crossbar with his great shot.

It’s really the little movements he puts in that seem to throw Real Salt Lake off.  Why he hasn’t had as much success against other teams is a mystery to me.  I wouldn’t be surprised if he starts to trouble other defenses soon too.

That’s all for today folks!